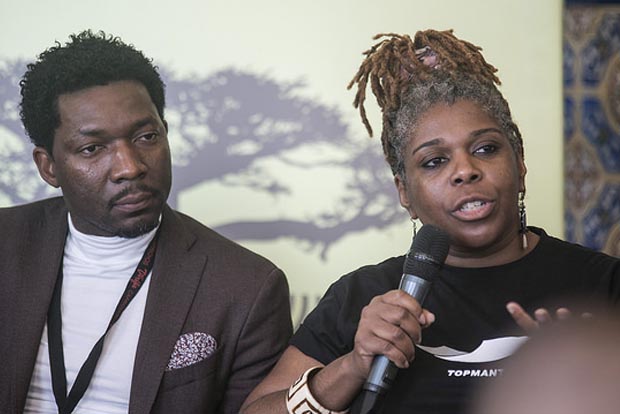 The Tarifa-Tangiers African Film Festival gives the floor to black film-makers and actors from Spain, Portugal, the United Kingdom and Italy

Some of the best-known black actors in Europe gathered in Tarifa, a Spanish town located just 14 kilometres from the Moroccan coast, to discuss their situation in different countries in a session moderated by Spanish journalist Lucía Mbomío. Last Saturday, nine actors shared their experiences, as well as the difficulties and challenges which they face, calling for greater visibility and the normalisation of actors of African origin in audiovisual productions in each of the countries represented this year as part of the Palaver Tree area for learning and reflection at the Tarifa-Tangiers African Film Festival.

Spanish Afro-descendants have played a particularly active role in this year’s festival, as the poster for the 15th edition of FCAT illustrates: the central image features Emilio Buale, the first Spanish actor of African origin to play a significant role in Spain, in the film Bwana (1996) by director Imanol Uribe. Lucía Mbomío initiated the debate by criticising the fact that most black actors in Spain are limited to roles portraying “characters which are hyper-sexualised, poor or working as carers, among others”. Mbomío also spoke out against Spanish film productions depicting rural Africa, which overlook urban life during the years of the independence struggles.

Spanish-Moroccan actress Farah Hamed, who was born in Tetouan and grew up in Algeciras, added: “most of the roles we are obliged to play reflect an outdated reality”. However, Hamed admitted that the situation has changed in recent years and that roles are becoming more realistic and less stereotyped. Astrid Jones, a Spanish actress of Equatoguinean origin, confessed that she has refused to always be cast as “the immigrant, the prostitute or the domestic worker”, stereotyped characters which are far-removed from reality.

Meanwhile, Iris Peynado, a 60-year old Dominican actress residing in Italy, highlighted the discrimination faced by actors of African origin based on their skin colour and gender. Peynado admitted that she had had a very successful career until she aged. She stated that black actors in Italy are limited to playing “Brazilian or Romanians”, and that it is difficult to convince Italians that “we should be allowed to play other roles”.

Finally, Ângelo Torres, an actor from São Tomé and Principe resident in Lisbon, declared that “Portugal accepts black people when they stick to agricultural work. But when it comes to inviting them into the casa grande (the master’s house), the problems begin.” However, he emphasised that the situation of black actors in Portugal is very different to that of other European countries. Torres admitted that actors of African origin have closer links to theatre and cinema production in Portuguese-speaking countries than in Spain or Italy.

Directors from the African diaspora in Europe

Newton Aduaka, the Nigerian director of Rage, the first film to be directed by a black film-maker in the history of British cinema, said that large production companies in the audiovisual sector and public financing systems for cinema in Europe are afraid of Afro-descendant directors: “They fear the voices of black people, they are afraid that we will reveal our truth”. He also explained that the issue is not that a group of white people are conspiring to prevent black directors from being heard, but rather an institutional racism in the psyches of European elites in the fields of art and culture. “They are simply afraid of our perception of reality”.

Meanwhile, Santiago Zannou, director of El Truco del Manco, which won three Goyas in 2009, explained that “the industry is only interested in white people’s version of reality”. Zannou criticised the Spanish feature film El Cuaderno de Sara, which he said was unacceptable and offensive to Africans due to its paternalistic, reductionist view of Africa, depicted as a monster which is threatening to white people. Zannou spoke of the ignorance and cynicism of large Spanish media groups. “I contacted a woman with a proposal for a film I wanted to make, and the first thing she asked me was: but do you really think there’s racism in Spain?”.

Finally, Fred Kudjo Kuwornu, an Italian-Ghanaian director, explained that he found it easier to film in the United States than in Italy. According to the director of Blaxploitalian, it is difficult to obtain funding from the Italian public financing system, and he is obliged to self-produce his films. He also stated that producers prefer projects by white film-makers, and that when they receive proposals from black directors they overlook them completely.

This edition of the Palaver Tree is organised as part of the ACERCA Programme at the Spanish Agency for Cooperation and Development (AECID).