Omar Victor Diop: the photographer who turns into a bird to capture the real Africa

Omar Victor Diop is the artist behind the photography which illustrates the poster of the 18th Tarifa-Tangiers African Film Festival. Hailing from Senegal, with his work he gives visibility to black history, vindicates the dignity and freedom of his town and, through his photographs, depicts the different realities and changes in African society, both on and off the continent.

Omar Victor Diop, born in Dakar in 1980, developed an interest at an early age in photography and design, as a means to capture the diversity of the modern African societies and lifestyles. His work is interrogative, prospective, intriguing and by nature deeply rooted in Africa while at the same time clearly open to international inspiration. Victor Diop’s work includes portraits with visual references which range from classic European paintings to African post-colonial studio photography, and has been displayed in Paris Photo, FIAC in Paris, Alliance Française in Madrid, the Arles Photography Festival, the London Contemporary African Art Fair and the Mali African Photography Biennial.

Omar Victor Diop’s universe explores contemporary themes such as climate change and racism, though it also deals with the daily life of African people, to show “their dreams, their suffering, but also their joy”. In the artist’s words: “I want to show the everyday Africa, the modern, urban Africa that isn’t talked about enough but that is there”. This idea is evident in his series The Studio of Vanities, in which we can see portraits of some famous figures from the world of African culture, such as the Senegalese designer Adama Paris, the film-maker and journalist Oumy Ndour, and the Haitian actor Jimmy Jean-Louis.

The image we see on the FCAT poster belongs to the series Bird Stories and its description reads as follows: “I feel like a bird today, I’m gonna show you. Just set me free…”. Victor Diop’s work transmits this capacity to gain altitude and broaden horizons, and invites us to submerge ourselves in the diversity of Africa in a year in which more than ever we need to feel we can fly, especially if it is through African cinema.

“I come from a generation of artists who, through naturalistic photography of the colonists, portrayed African people as specimens of observation, humanised the photographic gaze towards Africans, and showed normal, modern, happy African people.” – From a statement by the artist to the EFE Agency. 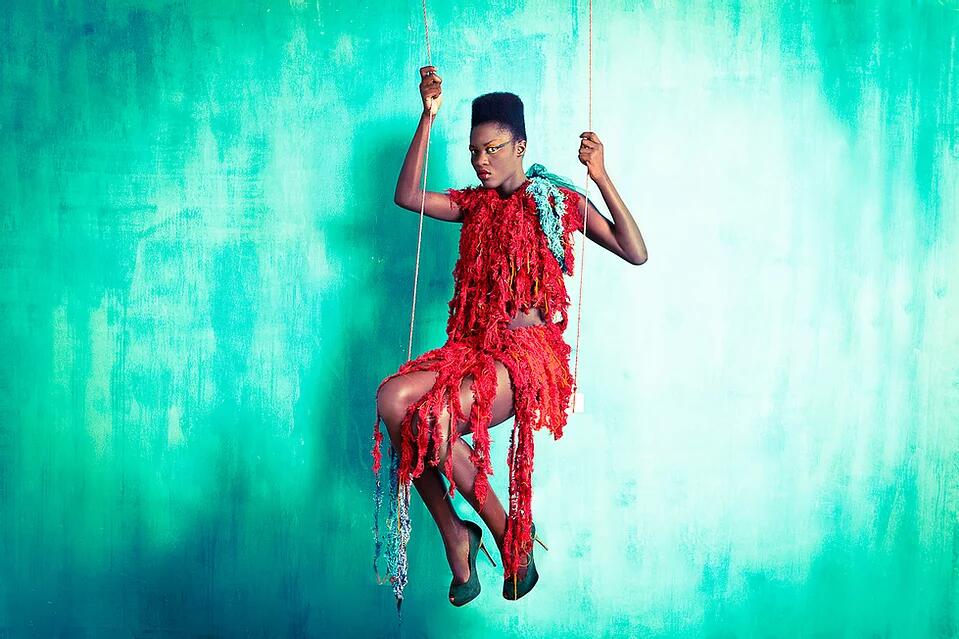 Photographs from the series Bird Stories

PrevAnteriorThe 18th Tarifa-Tangiers African Film Festival returns with a hybrid edition which takes another look at the film revolution in the cinemas of the continent of Africa.
SiguienteAfrica shortly: saying a lot in little timeNext