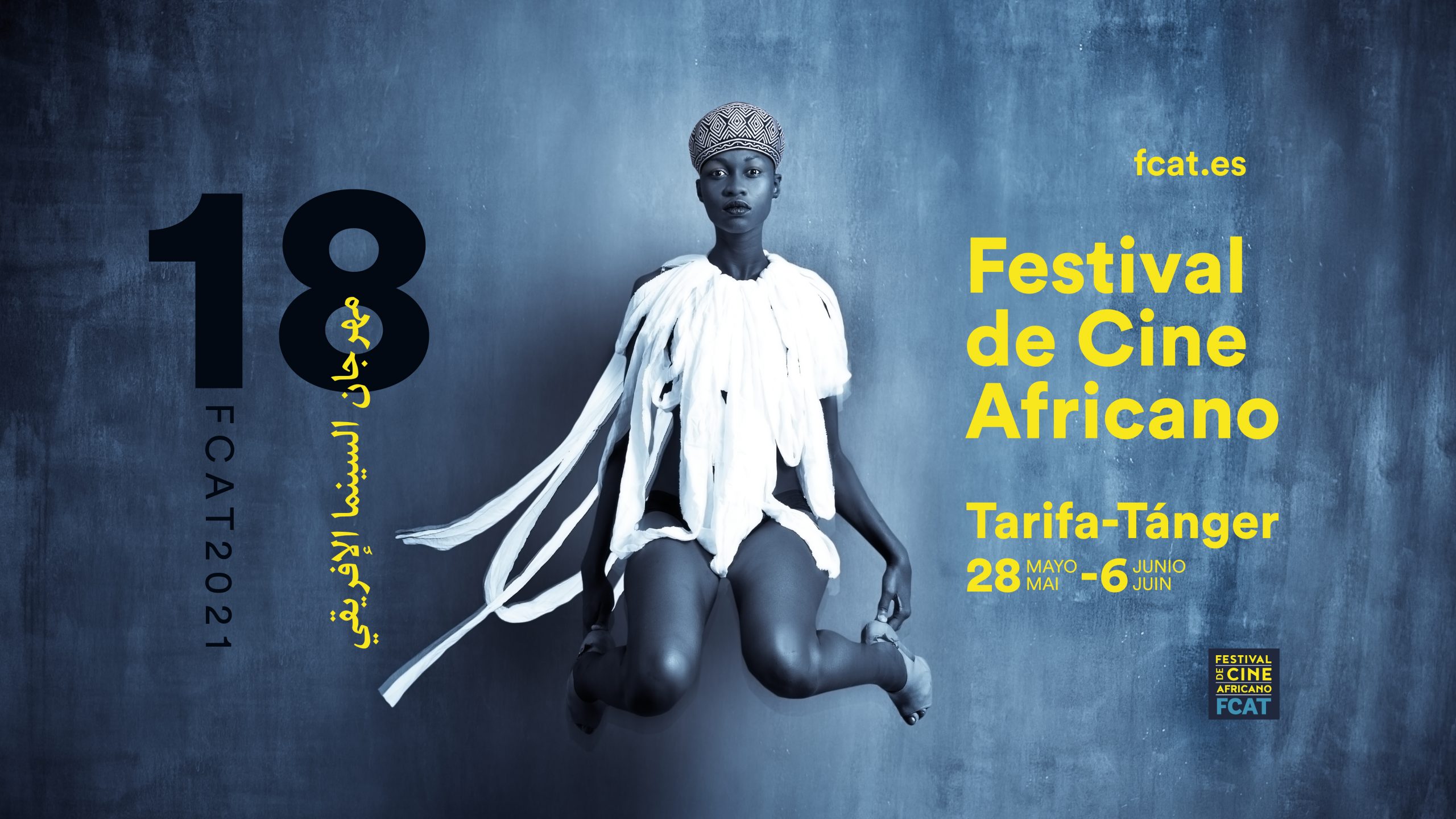 The 18th Tarifa-Tangiers African Film Festival returns with a hybrid edition which takes another look at the film revolution in the cinemas of the continent of Africa.

This year’s poster, by the Senegalese photographer Omar Victor Diop, was revealed at the launch event at CICUS, in Sevilla.

The festival will focus and reflect on Spanish cinema’s newfound gaze towards Africa, and will see the inclusion of new items such as a post-production workshop and an extension in Ceuta.

Sevilla, 13th of April, 2021. A woman in white, suspended in the air, on a blue background. This is the image that greets us from the poster of the 18th edition of the Tarifa-Tangiers African Film Festival (FCAT), which will take place from the 28th of May to the 6th of June. This hybrid edition will consist of live events in Tarifa, with Learning Space in Morocco and Spain, as well as various virtual events. The photography is by the Senegalese artist Omar Victor Diop, who serves as an international benchmark in his country due to his manner of capturing the diversity of modern African societies and lifestyles. The image, “A Staged Portrait”, according to the artist, forms part of the series “Bird Stories”.

Diop participated this past Tuesday, from Dakar, in FCAT’s 18th launch event, which was held in the Centre for Cultural Initiatives (CICUS) in Seville, and said he felt “happy and proud” to contribute to the efforts of the festival and “to show Africa in all its diversity and Africans in their daily lives; their dreams, their suffering, but also their joy”.

According to the director of the festival, at this, the 18th iteration of this meeting with African cinemas, the philosophy is the same as always: to straddle the two countries, two continents, different languages and various cultural traditions, while again adapting with all of the security measures necessary for the reality in which we find ourselves”.

For Mane Cisneros, “the profound changes which have taken place in African cinema have meant that this cinematography which has in the past been mostly ignored by international film festivals is now an object of ambition and competence among large festivals”. The FCAT’s director is glad to see more and more openness to these “realities which are pure cinematic revolution and which emerge as a unique aesthetic achievement in contemporary cinema”.

In Seville, the launch event of the 18th FCAT closed with a mini concert in the courtyard of CICUS, by Esther Weekes Jazz Flamenco Trio and their project Crossroads, a compilation of emblematic blues songs crossed with flamenco which transcend cultural boundaries to explore new artistic territory. Guests had the opportunity to try a bissap, the national drink of Senegal, the home country of this year’s poster artist, whose recipe includes the hibiscus flower. 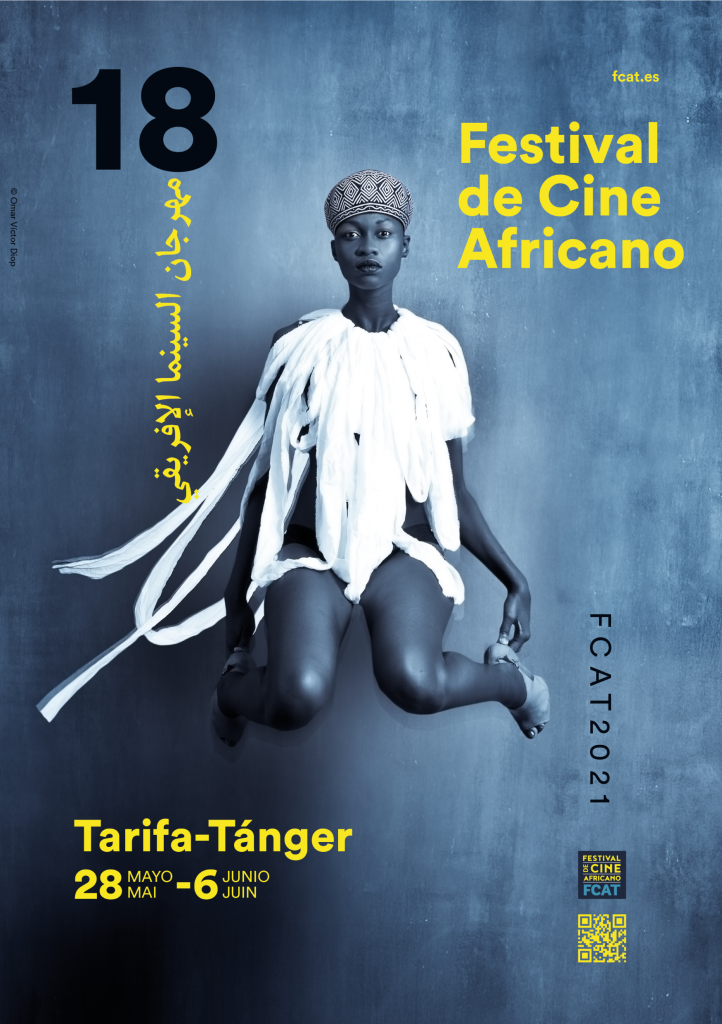 The 2020 edition of the Tarifa-Tangiers African Film Festival will be marked by its focus on Sudan and its cinematography, which up to now has been quite unknown but which has gained momentum in recent times, with a presence at international festivals.

The retrospective combines short films from the first film-makers of the Sudanese Film Group, Ibrahim Shaddad, Eltayeb Mahdi and Suliman Elnour, who are also the protagonists of Talking about trees (Suhaib Gasmelbari, 2019), the film that won the AECID award at the 2020 FCAT, which will be shown again at the festival. In addition, the work of Gadalla Gubara, the most prolific director in the history of Sudanese cinema, will be shown; from his advertising productions to the few fiction pieces he made, Tajouje and Les Miserables, finished posthumously, as well as his numerous documentaries.

The meeting with Morocco continues to be very important for FCAT, at which Spanish cultural centres in different Spanish cities will this year host the festival’s Learning Space, as current limitations due to the pandemic do not allow more activities during the festival. The Maghrebi country and the Spanish autonomous region share a common history, with profound historical and cultural ties which this festival connects by extending a bridge of cinema and culture across the Strait of Gibraltar.

Spanish cinema which looks to Africa

In this year’s activities, the focus of the festival’s reflection is on the gaze towards Africa that has begun to take place in Spanish cinema and which has this year been seen reflected in the Spanish Cinema Academy’s list of nominees and award winners. A roundtable in the Palaver Tree forum, titled Spanish cinema adds diversity: a look (finally) to Africa, will be streamed live and will unite film-makers and journalists around questions such as “Why this change in the Spanish cinema of today?”, “What image of Africa is being shown in these new productions?”, and “Can a new relationship between Spain and Africa be discussed through cinema?”.

In this year’s edition, we will debut the post-production workshop FCAT LAB, given that the African Film Festival has seen in its latest editions not only an increase in African films currently being produced, but also an increased interest in these productions from the main international festivals and global audio-visual markets.

FCAT LAB’s first edition will take place online in the international contest, thanks to the support of the Spanish Agency for International Cooperation and Development (AECID) and also to the collaboration of different Spanish and international companies. It will include a masterclass with international experts, one-to-one meetings and awards which will be conferred within a market of projects.

These projects can be registered, until the 15th of April, for an initiative which seeks to increase the visibility and the opportunities for these films in the post-production phase, presenting them to sales agents, distributors, VOD platforms and buyers in general who attend FCAT, physically or virtually.

Also new in the 18th edition of FCAT is its extension to the Ceuta University Campus, thanks to an agreement with the University of Granada. If sanitary restrictions allow, films from this year’s programme will be projected, both shorts and feature length, and there will be face-to-face meetings with directors.

The Tarifa-Tangiers African Film Festival is part of PANTALLA, the State Federation of Film and Audio-visual Content Festival Coordinators, which unites 179 festivals from 8 coordinators and 14 autonomous regions which make up a total of 1 million spectators, all committed to quality and diversity.

PrevAnteriorFCAT closes its first hybrid edition with a global impact
SiguienteOmar Victor Diop: the photographer who turns into a bird to capture the real AfricaNext