Sunday at the Festival of Tarifa: Social cinema and poetry gazing out at the Strait 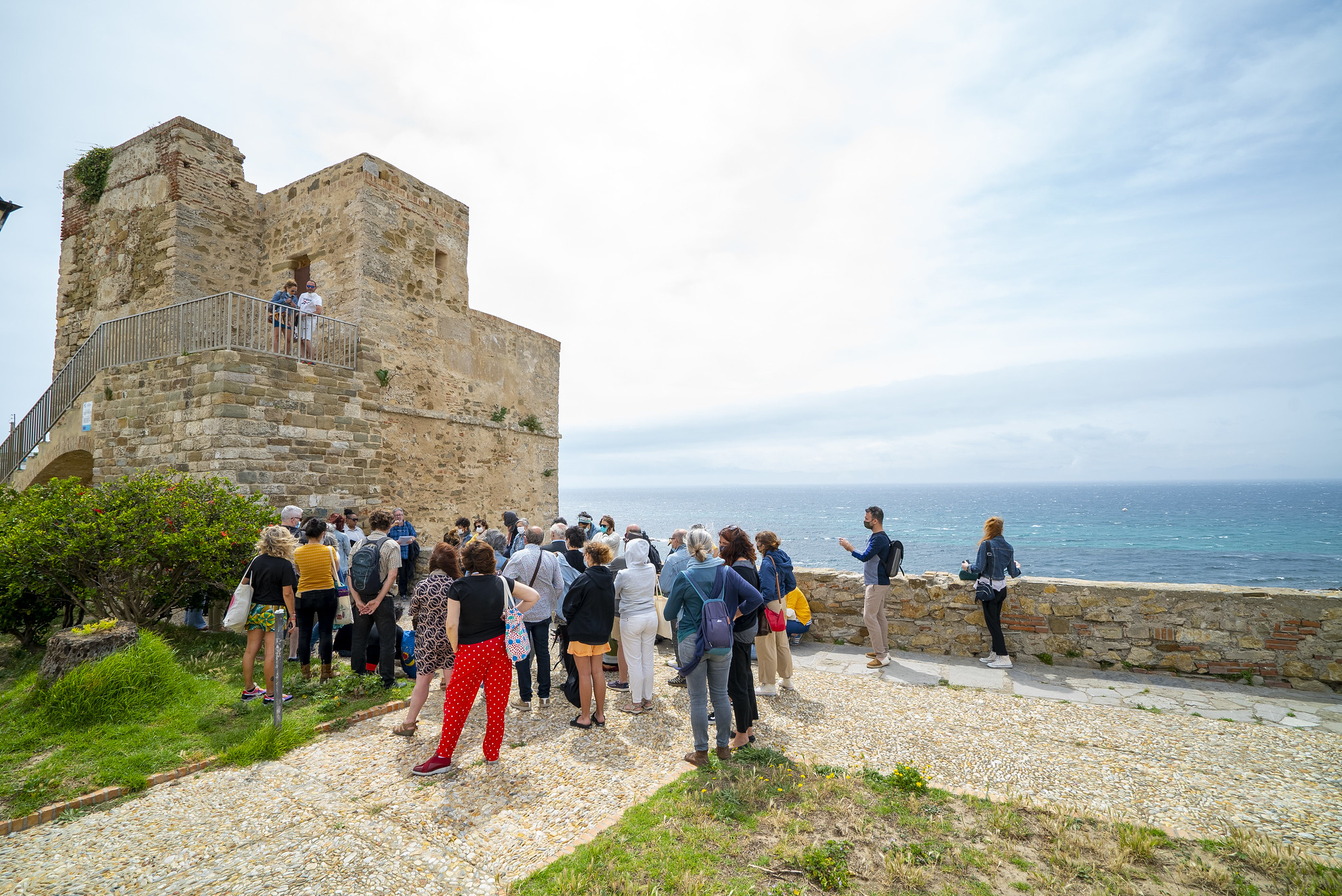 Dieudo Hamadi, an exemplary documentary filmmaker in Africa, gives a masterclass which reviews his career at The Palaver Tree.

The Entrelineas literary tour and the Literary Space put the parallel activities into words.

Tarifa, 30th of May, 2021. The African Cinema Festival spilled words into the streets and squares of Tarifa on its most literary day. Literature and poetry looking to Africa joined forces with the power of the cinematic images in one of FCAT’s classic parallel activities, the Literary Space.

The Teatro Alameda hosted the presentation of the Libros del Baobab, a collection of books launched by Sonia Fernández (Literáfricas), Chema Caballero (Africa is not a Country, and Black World) and Alejandro de los Santos (Afribuku and FCAT), which seeks to create a community of readers that gives continuity to the translation of African authors to Spanish. At FCAT, Caballero presented the book Estoy Solo, by Mbarek Ould Beyrouk, translated for the first time into Spanish.

It is the first novel of the collection and takes place in a city on the edge of the Sahara which has been taken over by a terrorist group. The protagonist constructs a monologue in which he reflects on his friends becoming terrorists and on the destiny of a people in the hands of religious extremists. It won the Ahmed Baba literary prize.

In the words of Chema Caballero, “in Libros del Baobab we want to translate African literature which would normally reach a Spanish audience; literature written in Africa for African people. In Spain, we publish African authors who live in other western countries, but not authors who live and write in Africa”. Speaking about the book Estoy Solo, Chema Caballero says that thanks to this publication, “in Spain we now have the first novel by a Mauritanian author to be translated into Spanish, with spectacular poetic prose, contemporary ideas, and a feminist approach”.

Rwandan writer and rapper Gaël Faye virtually presented his successful novel Petit Pays, on which the film of the same name is based. The film, which was screened in the Afroscope section of the festival, explores the origins of violence through the eyes of a child. And this in the same week that Emmanuel Macron, while on an official visit to Rwanda, admitted his country’s “overwhelming responsibility” for the deaths of more than 800,000 Rwandans, most of whom were of the Tutsi ethnic group, in 1991.

At midday the literary tour of Tarifa’s streets, Entrelineas, set off hand in hand with poetry and with the book Season of Migration to the North, by the Sudanese author Tayyeb Saleh.

At the same time, in a meeting as unique as his films, Congolese filmmaker Dieudo Hamadi sat down with critic and African cinema expert, Olivier Barlet for a virtual chat which was live streamed from the Casa de Cultura. The Palaver Tree hosted a mastercall which reviewed the life and work of the documentary filmmaker, author of many award-winning films selected for the biggest festivals in the world and presented over the years at FCAT.

Hamadi’s work and point of view represent a revered benchmark of contemporary sub-Saharan documentary filmmaking, offering up a broad and kaleidoscopic portrait of modern day Congo. In this session, Hamadi spoke about the films which touched him, about how he grew up watching Hollywood films until he discovered another class of cinema in which he felt very different emotions.

The filmmaker went into detail on questions such as how he decides where to place his camera to capture what’s happening in his documentaries; how political, educational and healthcare institutions are important in his work to show Congolese society, although as is separation from these institutions; and how he conveys his stories through a main character, as we see in his film Mama Colonel, which won a prize at FCAT 2017.

Hamadi admitted in this discussion that he never knows what the end results will be when he starts working on a film, as he films live reality. “When I start filming, I don’t even know where I’m going”, confessed the director, who finds in documentaries “a fundamental school of cinema”. For Dieudo Hamadi, “the expressive possibilities of the documentary genre are as broad as in fiction”.

His latest film, Downstream to Kinshasa is competing in the Long-sightedness section following its trip to the Cannes Film Festival, being the first Congolese film to be selected for the Cote dÁzur’s festival. The documentary honours the endurance of a group of war victims who have been fighting for 20 years for official recognition of the conflict, as well as for compensation for the losses suffered. Frustrated by the local leaders’ apathy, they decide to take the case to the capital, Kinshasa; a dangerous voyage down the River Congo.