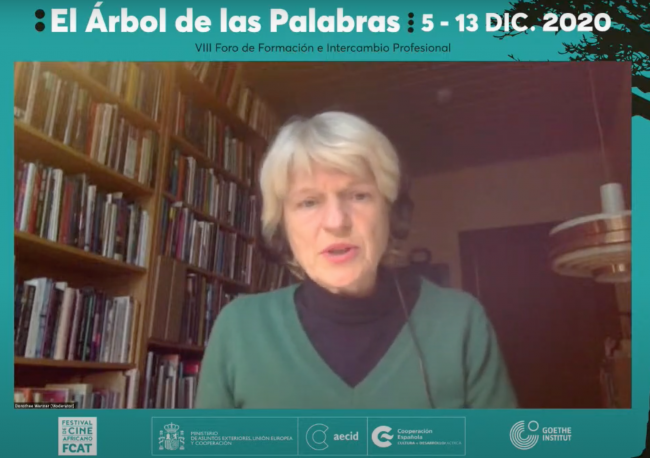 A rich debate between German film programmers took place on 10 December during a webinar of the Palaver Tree Forum organised by the 2020 Tarifa-Tangiers African Film Festival (FCAT).

10 December. Tarifa, Spain. The webinar entitled “European mechanisms for the co-production and distribution of African cinema: the case of Germany in Africa and Europe” was moderated by Dorothee Wenner, filmmaker and programmer at the Berlinale.  included panelists such as Sarika Hemi Lakhani (film producer and managing partner at One Fine Day Films), Bernd Wolpert (Head of the Evangelical Centre for Films on Developing Countries), and Marc-André Schmachtel (head of the film, television and radio department at Goethe Institut).

These renowned film agents work in the creation, promotion and dissemination of films from Africa. During one and a half hours, they shared with an international audience their analysis of the strategies of Germany’s co-production and distribution. In fact, in recent decades, Germany has positioned itself as one of the main European co-producers of African films. Along with France, the country plays a fundamental role in the dissemination of many African movies through its network of Goethe institutes and, furthermore, has a prominent role in the commercial distribution of many titles in Europe. FCAT, in its programming, had until now paid special attention to the role of France and the Francophonie in the production and distribution of African films, but very little to that of Germany. It was time for this event, which has become a reference for the dissemination of African cinema in the Spanish-speaking world, to dedicate a webinar to this subject.

“There is an increased global interest for Africa, but how is this translating in terms of film production and consumption, especially in Germany?” This is how Dorothee Wenner, film programmer at the Berlinale, kicked off the debate. Marc-André Schmachtel spoke about the importance of continuing to work to give more visibility and enhance access to African films for audiences both in the continent and in Europe. “We have to respond to the local and national film context and see how we can come in and work with new partners. Film is one of the most important activities of film for the Goethe Institut around the world,” he said. “We are a cultural institution, so we have to be open and flexible. If you as a filmmaker come knocking at our door to ask questions, we will always try to provide answers.”

The issue of the language barrier was also addressed. “Very few African films are dubbed, and luckily because it can destroy the film. Germany is not so familiar with subtitling, so it has been a real hindrance for [the consumption of] African films,” said Bernd Wolpert, while also recognising that “there has been an improvement in recent years.” Dorothée Wenner also spoke about the dilemma of dubbing or subtitling African films for the German audience. “If you take away the voice of a person, part of the personality is lost. On the other hand, in Germany, if we don’t dub, we risk losing a third of the audience,” she stated. Sarika Hemi Ladakhi noted that “dubbing a film is extremely expensive,” but sometimes necessary as in the case of family films. “The German Ministry of Foreign Affairs assisted us also for the dubbing of Supa Modo, because they knew the audience was very young and wouldn’t be able to read the subtitles.”

The debate also touched the problem of stereotypes and biased perceptions. “From my experience as a filmmaker there is a certain expectation of what an African film should look like,” stated Sarika Hemi Ladakhi. “I have very strongly tried to ignore the question. But I often find myself answering it, because this is what people want to hear. It’s also very hard to have conversations outside expectations. I think it’s important to be and remain open, and to question oneself and the system. Take Supa Modo, for example. It has won 70 awards worldwide but, to date, no German network has bought the film.”

Answering a question from the audience, Berndt Woldpert shared a message addressing African filmmakers: “please tell what you have to tell. Write a script and send it to partners. But if you want to fulfil expectations from Europe or Germany, you will never succeed.” On the same note, Marc-André Schmachtel provided an example. “Viva Riva”, by Djo Munga is an example that you can succeed in telling a totally unexpected story for European audiences. You have to tell your own story and I think that’s mostly what’s happening today in African countries.”

The webinar is part of a series of debates, the Palaver Tree Forum, revolving around African films from a market perspective which will continue until Sunday 13 December. The Tarifa-Tangiers African Film Festival which hosts this Forum is an annual event held on both shores of the Strait of Gibraltar since 17 editions. Given the limitations imposed by the pandemic, the Festival has taken place both online and offline. Besides a wide array of parallel activities, held predominantly online, a selection of 40 films coming from 18 countries of Africa and the Americas has been programmed. These have been both screened in theater halls and made available for streaming within Spain. Of this year’s film selection, approximately half compete for awards. The palmares will be known on 13 December, the final day of the Festival.

This article is also available in German and in French.