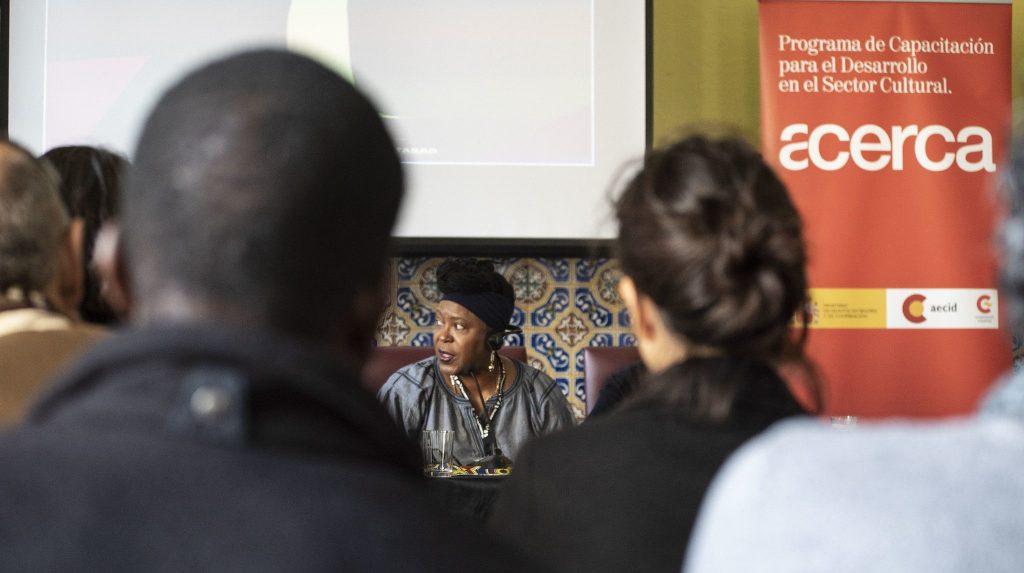 From 5 to 13 December 2020, the Tarifa-Tangiers African Film Festival will host the 8th edition of the Palaver Tree Forum, which brings together industry professionals, festival programmers, students and the general audience to examine African cinemas from different angles.

Tarifa, Spain. 19 November 2020 – More than just a showcase of African films, the Tarifa-Tangiers African Film Festival (FCAT) is a space for debate, critical reflection and training. Since its inception, FCAT has worked to promote a deepened understanding of the factors that enable or hinder visual creativity stemming from the African continent. This year, against the backdrop of the COVID-19 pandemic, the Palaver Tree Forum will once again provide the opportunity to explore the aspects that most influence the African film industry and narrative through free online round tables, webinars and master classes. This edition of the Forum, to be held from 5 to 13 December, will pay particular attention to the pandemic’s impact – especially how it has disrupted production on the one hand, and how it has accelerated important changes in the existing ways of making, consuming, promoting and disseminating films on the other hand.

The Forum’s programme of events will be articulated in five thematic axes which are correlated to the festival’s film programme this year: “LOL: Humour in African Cinemas”; “Despite it All, Artists Create: Being an Artist in Equatorial Guinea”; “Anti Colonial Visions: 60 Years of African Independences”; “The Fires Next Time: Systemic Racism in the West”; “The Third Root: Afrocinemas of Latin America”. These themes will be explored during live-streamed round table discussions with translations in English, French and Spanish. Panelists include acclaimed film experts and filmmakers such as Marguerite Abouet, Laurence Attali, Hind Meddeb, Billy Woodberry, Aldemar Matías, Wendy Espinal and many others. Each round table ties in with a specific film programme. Twenty-four films – most of them not competing for awards – have been specifically curated to help the audience delve deeper into the subjects addressed.

From 9 to 11 December, the Palaver Tree Forum will also host a series of capacity-building and industry-oriented events aimed first and foremost at African filmmaking students – but also open to the general audience. The conclusions of the 2019 Palaver Tree Forum will be followed up on by a panel of international experts through live streamed sessions. They will illustrate the theory with practical cases – particularly in digital film marketing and business management – providing insights on how to position African films in today’s interconnected and global audiovisual markets. Four different webinars will examine a wide range of topics: the African cinema business in pandemic and multi-screen times; European mechanisms for co-production and distribution of African cinema; the case of Germany’s co-productions in Africa and Europe; digital marketing for independent films; and finally, the dissemination of African cinemas in post pandemic times. Among the experts invited are Senegalese film business specialist Khadidia Djigo, Nigerian director Chioma Onyenwe, South African programmer Theresa Maria Hill, FESPACO’s new general delegate Alex Moussa Sawadogo, German film producer Sarika Hemi Lakhani, German film distributor Bernd Wolpert, as well as Spanish film festival director Xavi Lezcano and Italian specialised programmer and author Alessandra Speciale, among many other international experts.

All activities and round tables of The Palaver Tree will be carried out through a teleconference platform and will be free of charge upon registration (until full capacity is reached) through the FCAT website. The vast majority of these sessions will have simultaneous translation in different languages and will also be available on FCAT’s Youtube channel, both live and recorded. As for the festival’s films, they will only be available for streaming by those who browse from Spain through the Spanish platform Filmin.

The Palaver Tree is an annual project of the Tarifa-Tangiers African Film Festival – FCAT, organized by the NGO Al-Tarab, in collaboration with the ACERCA training programme for development in the cultural sector of the Spanish Agency for International Cooperation for Development (AECID). For the first time, the Forum also counts on the support of the Goethe Institute.

Browse the programme, save the dates and register for free at The Palaver Tree’s online forum

PrevAnteriorThe 17th FCAT will combine live and online sessions
SiguienteThe Palaver Tree Forum: Filmmaking is a tool to perpetuate the legacy of anti-colonialismNext