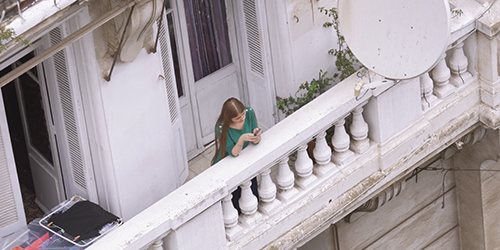 The world premiere of Fais Soin de Toi and the presence of its director, Mohamed Lakhdar Tati, have marked Sunday, April 30th, at FCAT 2017.

Fais Soin de Toi, the Algerian director’s latest documentary, co-produced by France, Algeria and Spain, portrays his country through the loving sentiment of its inhabitants. Fais soin de toi has been screened for the first time in public and is the film one should see to better understand sociological changes in contemporary Algeria. In this documentary, Mohamed Lakhdar Tati tries to find out a response to his personal situation in relation to that of Algerian society, almost as self-therapy. He wants to understand what love means to Algerians. It turns out to be a daunting task: when asked, many of his fellow nationals inhibit their true feelings and revert to intimidation, contradictions, and sometimes hypocrisy.

The documentary includes several scenes showing various species of insects. “Insects behave instinctively and naturally. Instead, human beings can be very artificial”, explains Lakhdar Tati at a Q&A session after the screening of the documentary in Tarifa. Furthermore, “this film does not want to break a taboo, but to break with a situation of false modesty, and show reality, but also the environment, since things do not evolve in Algiers as much as in rural areas of the country”, explained the director, who has traveled extensively across Algeria for this production. While the film documents his travel through the country, it also shows a journey into himself, which has helped him to understand others better. “It has been a pleasant surprise to find so many people who have spoken so openly, including me, since empathy has been important in making it. People have opened their hearts to the camera”, said Mohamed Lakhdar Tati.

Lakhdar Tati also participated in the Cinema Aperitifs session, where he has been able to answer questions from the public, journalists and filmmakers, such as Ikbal Zalila, Tunisian film aesthetics professor and a member of the FCAT 2017 Jury; or the filmmaker Aïcha Macky, from Niger, who is attending FCAT to present L’arbre sans fruit, her latest documentary, which competes in the section Long-sightedness. The session also included the director of Atlal, Djamel Kerkar, whose documentary shows the life of the inhabitants of two parts of Atlal, “that of the ruins, and that of reconstruction”, a village that had suffered during the years of the darkness. Javier Estrada, Spanish film critic, described both documentaries as “two films that break with the traditional canons showing us what is not usually seen”.

PrevAnterior‘Félicité’ inaugurates the African Film Festival of Tarifa and Tangier
SiguienteArtivism: South African Art in the apartheid and post-apartheid eraNext