Mothers, daughters and sisters: Women of the African Cinema at the FCAT 14th edition 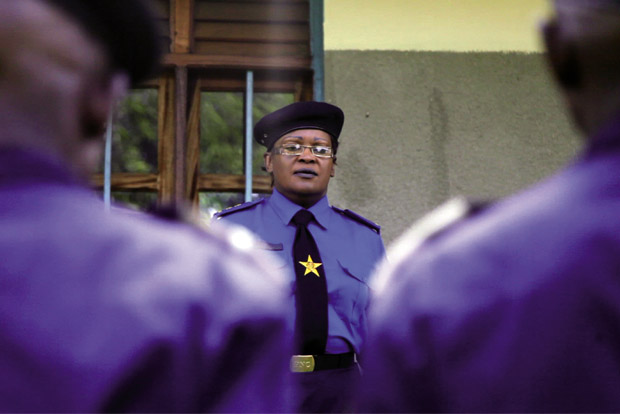 Colonel Honorine Munyole, a forty-four-year-old widow and mother of seven young children (three of them adopted), runs a small police unit in the war-haunted areas of the Democratic Republic of Congo. Her work is dedicated to protect women who’ve been raped and children who’ve suffered abuse and confinement because of the common belief that they are practicing witchcraft. At the beginning of Maman Colonelle documentary by Dieudo Hamadi, she’s transferred from Bukavu to Kisangani – Congo’s third largest municipality. What appears to be a promotion turns out to be a tough challenge. There she has to deal with practical obstacles, along with the nightmarish traumas and social deformities, coping with helplessness, depression, and the envy affecting people recognized by the authorities as “victims”.

In Kinshasa, the capital of the same country also takes place action of Félicité, Alain Gomis’s latest feature movie. Félicité, the main character, struggles hard in unstoppable determination to raise money for her son’s surgery after a terrible traffic accident. But in this traumatic reality an independent and self-confident night club singer can no longer rely on certainties and convictions. Her desperate, yet metaphoric tour through the impoverished streets and wealthier districts of the Congolese capital is driven by the Uncertainty, and becomes a valuable lesson of life, which helps to find peace and serenity in the harsh world.

To understand from where both protagonists – first of them authentic, other fictional – draw their strength is hard for a Western audience; however we follow their mission and struggling with growing fascination. So these are African women – brave, with strong personalities, driven by the sense of justice, and aiming to protect their families and people surrounding them, while copying with problems that are often unimaginable to the present Western society. Women filmmakers teach us about African reality without make-up, as they simply identify themselves as mothers, daughters and sisters, showing the importance of feminine power and strong family ties. They intend not only to represent African women in general, but to educate them in terms of self-importance and self-confidence in a traditionally male dominated world. And what is also important to us, a fresh look into the complexity of life, and the mission of breaking the taboos in fictional and documentary tales created by African women have a real power of attraction.

African filmmakers in the 14th edition of the FCAT:

Jihan el-Tahri is an Egyptian and French filmmaker, author and visual artist born in Beirut. She started her carrer as a Photographer and became an international news corespondent for prestigious news agencies and newspapers like Reuters, The Sunday Times and the Washington Post. In 1990 she became a full time film director and since that time has directed nore than a dozen films including Emmy nominated The House of Saud, which was awarded with several international prizes including BANFF. Her Prince of Aid won the European Media Prize, and Behind the Rainbow was awarded at FESPACO. She has written two books, and debuted as a visual artist with an exbition titled After the Year Zero presented in Berlin and Warsaw. She has engaged in various associations and institutions working with African cinema and served as a treasurer in the Guild of African Filmmakers in the Diaspora, and as the Regional Secretary of the Pan African Federation of Filmmakers (FEPAC).

Born in Niger, with a degree in Sociology, and Master degree in Creative Documentary Direction she became the documentary maker focused on the matters of taboos around sexuality. L’arbre sans fruit, her first documentary feature film is about infertility problems. In this film Aicha Macky presents herself sincerely as a married woman with no children, facing a non-standard situation in her society.

Born in London from Moroccan mother, Tala Hadid studied there Visual Arts and Philosophy, and now lives in Marrakech, Morocco. Her film Your dark hair Ihsan was awarded at several film festivals. Tigmi n Igren was premiered at the Berlinale 2017. The film portraits the life of isolated Amazigh community in the High Atlas Mountains in a village that has remained unchanged for hundreds of years.

After studying filmmaking in Tunisia and France (la Fémis and Sorbonne) Kaouther Ben Hania directed several short movies and documentaries. Her first feature film was selected by several international film festivals. Her latest movie, Zaineb Takrahou Ethejl, tells the story of a entry into adult life of a nine years old Zaineb, who has to move to Canada with her mother wanting to start a new life after her husband’s death. Zaineb opposes this mayor change in her life, even if everybody tells her that she will finally see snow…

Born in Ethiopia, Alamork Davidian moved to Israel, where she graduated in the prestigious Sam Spiegel Film and Television School. Her short movie Facing the wall had its premiere at the Student Film Festival in Tel Aviv where she won the Best Independent Film award. The story tells about Sureni, 14 years old Ethiopian teenager who, keeping her eyes shut and refusing to leave her bed denies the new reality in the Israeli absorption center.

Born in Algiers, Dania Reymond has a degree in Fine Arts from Marseille and Lyon, and from the Fresnoy Studio National des Arts Contemporains. Her first movie was granted with the Studio Collector and Art Collector Awards, and Le Jardin d’Essai was granted with the Young Jury Award at the medium-feature Film Festival of Brive. The film is about a trial in which a filmmaker meets with actors on the rehearsal of his next movie about young people in a besieged town, but the crew is faced with the same questions that the characters are.

Khadidiatu Sow is a Senegalese director who lives and works in Dakar, where she also graduated from the Beaux Arts School, and finally opened her own gallery/atelier. Her artistic curiosity and creativity led her towards cinema, and after participating in various short and feature films, she finally launched her carrier as a filmmaker. Une place dans l’avion is a short fiction story about a radio announcement telling that a special US aircraft has landed, and is open to any traveler wishing to emigrate. But there’s only one plane…

Adoma Akosua Owusu, born in US to Ghanaian parents, was trained in film, video and fine arts at the California Institute of the Arts. Her short movie Drexciya won the Best Experimental Short Award at the Guanjuato IFF. Her experimental works are part of the permanent collection of the Whitney Museum in New York and the Fowler Museum at University of California. Reluctantly Queer opened the 2016 Berlinale and tells the story of a young Ghanaian man living in the USA, whose emotions are torn apart between love to his mother, and his same-sex desire amid the increased tensions incited by harsh policies enforced in Ghana as regards homosexuality.

Originally from Morocco and residing in Canada director and producer Hind Benchekroun has worked on the documentaries and short films from 2004, and with her partner Sami Mermer created the production company Turtle Films. In Callshop Istanbul documentary she portraits the Istanbul’s gateway and melting pot of nationalities, cultures, traditions on the crossroad between Europe, Middle East and Africa.

A scriptwriter and director Isabelle Boni-Claverie was born in the Ivory Coast. She wrote for several magazines and publications and her novel La Grande Dévoreuse received the Young Francophone Writer’s Award. In 2000 she graduated from the French Film School la Fémis. Her short features and documentaries have been widely screened and awarded at international film festivals. In her documentary Trop noire pour etre Francais? she reflects the question of racial discrimination in today’s France.

Safinez Bousbia was born in Algeria and educated in Switzerland, United Kingdom and UAE. After several years working as an architect she entered the world of film creating Quidan Productions, a Dublin based Production Company. In her documentary El Gusto she portraits the legendary Algerian group playing el Chabbi music – a unique cocktail of Berber, Arabic and Flamenco music – the homegrown music of Algerian Kasbah and streets, that united religion, class, and ethnicity.

Born in Tunis, Raja Amari studied Dance, Italian and French Literature. Her interests were wider and in 1995 she entered the French Film School, Le Femis, to study screenwriting. She started directing short films, and then full-lenght movies. Jassad Gharib is her third feature film, in which she tells the complicated story where illegal immigration, islamist’s infected family issues and sexuality in professional relations create a complicated network of personal emotions.

HINDE BOUJEMAA (Tunisia) Ya man aach (It was better tomorrow)

After graduating Marketing from the Institut Economique de Bruxeles Hinde Boujmaa studied Screenwriting at Educatel-Paris. She is a co-writer of several Tunisian features and directed all the promotional clips for the Carthago Film Festival. Ya man aach is her feature documentary, I which she portraits the life of Aida, a homeless Tunisia woman wandering along with her children from one neighborhood to another, showing through Aida’s eyes, that nothing has changed after the fall and death of the dictator Ben Ali.

More to find out about African women of the screen: Beti Ellerson, writer, filmmaker and cultural activist established the Centre for the Study and Research of African Women in Cinema | Centre pour l’étude et la recherche des femmes africaines dans le cinéma in 2008. It is a virtual, dynamic and in-depth archive of information on the research, study and documentation of African women in cinema. Beti Ellerson’s African Women in Cinema in French and English is a database with a lively blog, details about women filmmakers, video interviews, essays and reviews, and various associated social media accounts.